Why I decided to stop paying rent

BY ALYKHAN PABANI, AS TOLD TO SARAH BERMAN | VICE.COM

When my girlfriend and I first moved into the place we live now, I didn’t know the landlord had earned a reputation as one of the worst in the city of Toronto.

This was five years ago now, and we started noticing the pests pretty quickly. We’ve seen everything from cockroaches to bedbugs to mice. Later I found out that tenants had actually given the company, Metcap Living Management, a “golden cockroach” award a few years previous. Still, we had already been living in Parkdale and absolutely wanted to stay.

We’ve seen the building deteriorate, and Metcap doesn’t really listen to our requests for repairs. When they do it’s always the cheapest, most temporary option. There are holes in their walls, leaks that are damaging their floors and ceilings, appliances that aren’t working. They’ve refused to maintain the elevator properly. There’s no wheelchair ramp in our building. I’ve seen people crawling up our front stairs, which is humiliating and painful. We couldn’t use our balcony for a year.

They also have to turn the water off once or twice a week, for like eight hours at a time. When they say it’s an emergency, we just have to take their word for it. Sometimes a really shoddy contractor has just made a mistake and flooded a unit. So yes, it’s an emergency, but it’s also a result of penny pinching and contractors not knowing what they’re doing.

Having no running water is a major inconvenience for me. I work like anybody else, and you have to do laundry when you’re not working. You can’t just switch the day you do laundry or cook food just because the landlord has decided to flip another unit. 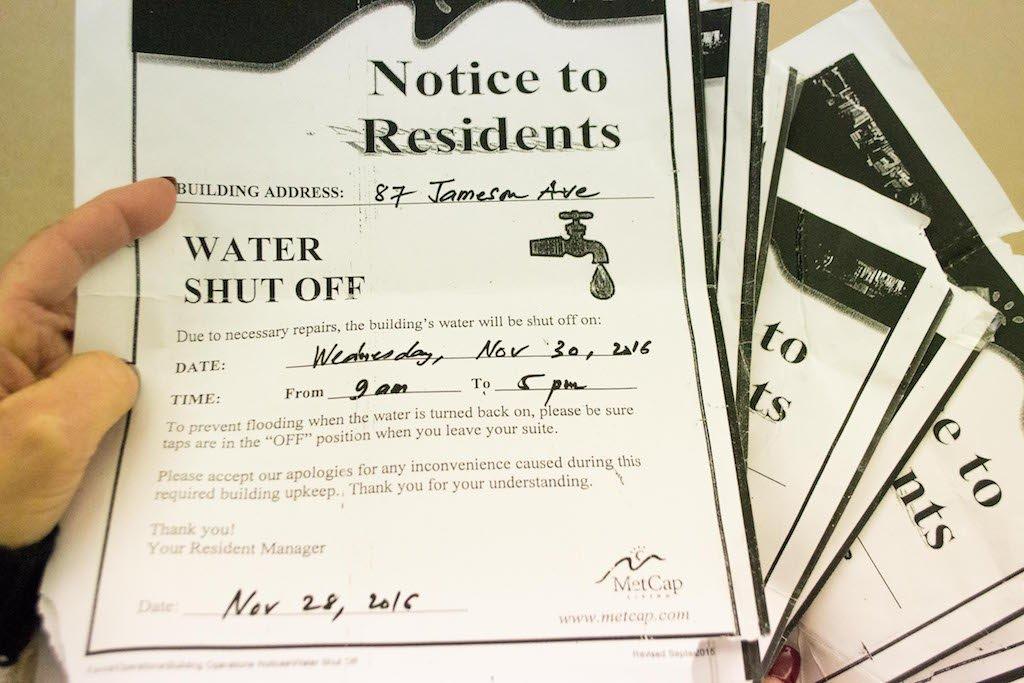 I fill up jugs of water and alway have them in the fridge in case there’s a shut off and didn’t get the memo. But you can only prepare so much. This community is home to lower income people, people with disabilities, elderly people—it really puts them in danger not to have water.

It was the rent hikes that got us talking to our neighbours. We were hit with two of these “above-guideline rent increases” in five years. A lot of people can’t afford these increases. When an old tenant that might have been paying $900 leaves, they can turn around and charge the next person $1,400. They reset the price at whatever the market can bear. There’s incentive to push us out, so they’re doing everything they can to get rid of us. There’s this lack of respect—we’re clearly not wanted in these buildings.

I was never too much into activism or organizing. When I’m not working, I like to do my own things. I realized after getting to know my neighbours that there is support there—support in numbers. Your neighbours are in the same boat as you. So on May 1 we decided over 200 of us would stop paying rent until Metcap does the repairs and stops the rent hikes. We will pay rent if these two demands are met.

It’s not like somebody just woke up one day and said, ‘We should go on rent strike!’ We exhausted every option first. We’ve tried the legal process, and have attempted to negotiate, but they’ve refused to budge. The tenant laws have been written in a way that favours landlords over tenants. Above guideline increases are very rarely denied, if ever. They have no reason to come to the table.

Earlier this year we brought 100 people and a box full of about 200 repair formsto our landlord’s head office on the other side of the city. They didn’t even send someone out to talk to us. Instead they hired security to keep us out.

A lot of us recently got an eviction notice, but not all of us. That leads me to believe they are doing it in chunks. I know it’s unprecedented for the tenant board to process this many evictions all at once.

I’m not going to lie, there are some people who have changed their mind and paid their rent because they were nervous. But others have committed to joining the strike in June. More have joined than dropped out, so we’ll just keep on applying pressure, until AIMCo, a major investor in Metcap Living and owner of three of the buildings, forces them to do the right thing.

AIMCo is a Crown corporation in Alberta. When we asked them, ‘How do you feel about Metcap’s practices? Are you complicit in this?’ They said Metcap is doing their own thing, if they’re out of line that is on them. But fact of the matter is, AIMCo is making money off of those practices and have the power to stop that. That money goes into pensions of government workers for Alberta. Working Albertans likely don’t want their pensions built on the displacement of low income tenants.

The fear of eviction has always lingered but we know our rights. We can’t be evicted overnight, and everyone has a right to a hearing before they’re evicted.

If we’re evicted from Parkdale, that’s an eviction from Toronto. Parkdale is one of the last neighbourhoods with a high density of low-income tenants in the city. We have the largest Tibetan community in North America, we have newly-arrived refugees, immigrants using the neighbourhood as a landing strip from oppression. It’s insulting and outrageous that our mayor and other politicians are constantly rambling about Toronto being the envy of the world, a place where we celebrate inclusivity. The reality is it’s quickly becoming place that’s just for the rich, and those who are not part of that category are seen as an obstacle to growth.

Sarah Berman’s writing has appeared in VICE, Adbusters, Maclean’s, Reuters, the Globe and Mail, the Vancouver Sun and many others. A lifelong supporter of independent and alternative media, Sarah has contributed to nonprofits like Journalists for Human Rights, Megaphone Magazine and Paper Tiger TV.